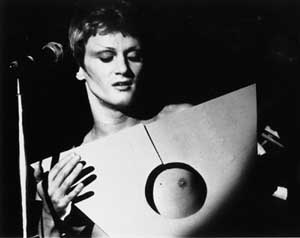 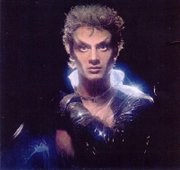 Thanks to Grammy Master B for sending us the genius music of Jobriath.


Introduced in 1973, Jobriath became rock's first openly gay performer. His flat-out declaration of homosexuality was brazen considering the era: The world was ready for the likes of David Bowie and Marc Bolan, who coyly dangled their possible proclivities. Even Lou Reed's assessment of himself as "a male chauvinist bisexual" was open to interpretation. But the finality of Jobriath's announcement--"I'm a true fairy"--left nothing to the imagination.
-Steve Gdula, The Advocate

Morrissey oversaw Jobriths first CD reissue in 04, It's a great CD, also worth checking out is Luke Haines newest CD, Off My Rocker at the Art School Bop, recently reviewed on Boadwee Blog
Free Jobriath mp3's
make sure to check out
heartbeat
Ooh la la
Dietrich/Fondyke

"John Currin and Rachel Feinstein stopped by for their only Basel event; Feinstein noted that her husband considers being an artist at Art Basel like being a pig in a sausage factory."

Of course Morrissey was all up in this. Thank you for this Corny, I'd completely forgotten about Jobriath.

Hey Cap'n yes, no doubt this would be morrisseys bag. Apparently Jobrith's lable wanted to do a huge promotional blitz, there were pictures of Jobrieth on city busses in the 70's. Of course it flopped, he ended up singing at diners (I read it on a fan site) and eventually died of aides in 83.

hi corny!!!! Hello! That's bumming me out, but wish I coulda been in one of those diners. This will make me try and reach out to my gay brethren on a regular basis should I see one performing in a diner.
What's bumming me out worse up on your blog are the Basel missives from anon.

The Gaylord Rehabilitation Center : 9:26 AM

I know, a bitch has got only so many rats asses to give, personally I'm running way low. Anon, if you are going to inflict these pictures on us they must be accompanied by some sort of belittling, or caustic, or critical, or sarcastic, or scornful, nay, withering commentary.

It was not me but I can provide a comment for you...I knew her as Miss Brown..."you've come a long way, baby!"

I meant her highness in gold, not the poor dog in the snow with a cone.. poor thing.