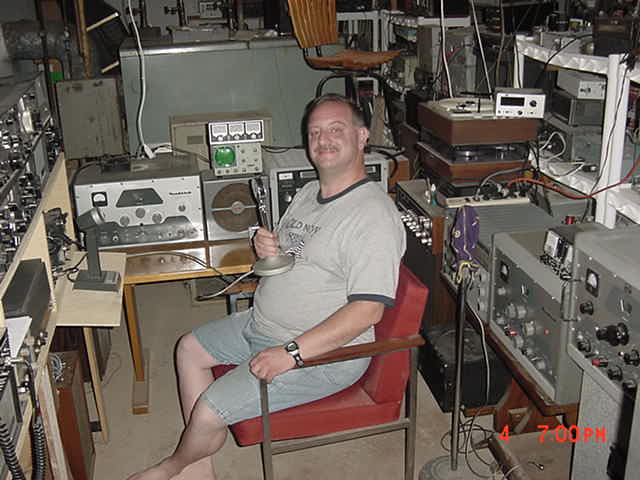 This is what Foghorn the bird would look like if he was a guy with a radio show. I've been trying to find an MP3 of my new favorite old band Turquoise, a British pop-psych group from the 60's that owes a lot to The Kinks but there's not much info on the web about them. They released a few singles and that was it. Recently a full length CD of their recordings was released, It's awsome. I got it at Rocket Science on 8th street which is my favorite CD shop in New York. I couldn't find any Turquoise MP3s on line, but WFMU's Bill Mac plays one of their songs on this radio show.

Comments:
corny, why is Foghorn waving a little metal detector over his belly? Did he swallow the car keys again?

HFP thanks you for sharing the CD shop tip, and after some hunting around he figured out that it is actually called Rockit Scientist. You may see him there spending us into oblivion. Booty-shaking, head-bobbing oblivion.

I can't hear anything here, so it'll hafta wait. But I will say that I must have the Turquiose, as the Kinks are one of my favorite bands. I have been listening to the Zombies since yesterday.

pd, Turquiose is really really great. They also have a song about the village green. I will burn it for you. email me you're address and i'll mail it.

Sloths, Rockit Scientist is run by a british guy who stocks a lot of hard to find stuff, a lot of oldies and weird left field stuff plus rock and pop and jazz. They don't do dancey music or break beats like adam plays, just so he knows.

I like it as an alternative to Other Music which gets annoyingly hipsterish.

I will go there. It's on 8th between what streets?
Generation records used to be good for that sort of stuff too.

it's on 8th between 2nd and 3rd right on the busy strip. It's on the north side of the street more towards 2nd ave. it's tucked away. There used to be a milkshake factory nextdoor, now it's a bakery or something.

I'll pop that in the mail tuit suite

where are my car keys?

Oh, I decided to take the jammy jar for a ride....sorry.

I know this isn't the forum, but the book I was asking you about is:

I am intersted in the movie rights.

Funny Gene, I was just trying to remember that today. Will get on it.

I feel like this guy in the picture is my future. Sorry Foghorn. I already look like him, only my mustache is blonder, and if you replace the microphone with a beer. I like to rest it on my gut when it gets heavy.
I liked the song, too.

Some rude house guest came over last week and said foggy was a "husky" bird. I know what husky means, it means built in beer shelf. I got one too capt'n, I got room for a whole bar.