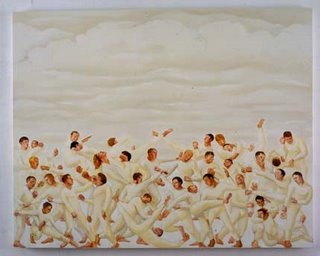 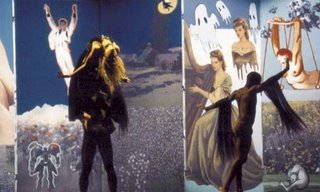 Here’s a plug for Richard Move’s The Show (Achilles Heels). Your’s truly did the sets. It’s a lot of fun, the lead dancer is amazing, and Deborah Harry is well, Deborah Harry.

In this New York-premiere, choreographer and director Richard Move brings to the stage a contemporary vision of the ancient Greek legend of Achilles. Move takes a wild spin on the story’s themes of war, love, glory, and fate, with a radical meld of dance forms, text, glamour, and reality television show antics.

Originally commissioned by Baryshnikov Dance Foundation for the White Oak Dance Project, The Show features Deborah Harry (Blondie), performing live songs as the Goddess Athena, and Rasta Thomas, most recently the lead in Broadway’s Movin’ Out, as Achilles, the role originally performed by Mikhail Baryshnikov.

The Show has an original score by Arto Lindsay, set design by visual artist Nicole Eisenman, lighting design by Les Dickert, and costumes by Pilar Limosner.

Comments:
WOW Corny you are the coolest. This looks amazing.

WOW Corny you are the coolest. This looks amazing.

Oops I said it twice for emphasis I guess.

Gee, how do you have time do all this? Two shows and now a rad set design? I suspect a clone.

Wow Corny these sets are gorge!

Hi Triple diesel! Wow. HI.
I did the sets a few years ago, the shows been touring in europe and has been around... and actually i've only been getting ready for one show. I have a painting in a group show in LA but made that work last summer. Sometimes my wife calls me a Lazy Cunt, (thats a term of endearment) but as a nickname, it gives you some insite as to what my life is like.

Corny hearing nice things about the set design from man in the field TS. I remember seeing Blondie on Sesame Street when I was little and wanting to be just like her when I grew up.Well her or the Asian lady in the seashell bikini on Soul Train.